Review of “Jesus on Trial: A Lawyer Affirms the Truth of the Gospel” 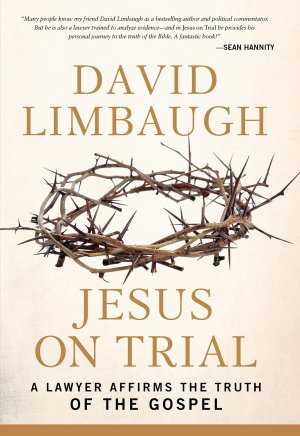 “I have long admired David Limbaugh for tackling difficult issues in the media and public square. While his public persona as a lawyer sometimes invites critical scrutiny, I have seen his tender heart and winsome witness to the love and truth of Jesus Christ.”

What an excellent introduction from a contemporary defender of the Christian faith. In his first book about his own faith, David Limbaugh shares his story about becoming a Christian.

I anticipated a lawyerly presentation and rebuttal of certain claims made for and against Christianity. What I read was much more personal and comprehensive. Limbaugh shares the major waypoints in his journey from skeptic to follower of Jesus Christ. He grapples with the paradoxes and hard questions of the faith, the miracle of the Incarnation, the testimony of the Bible and science, and how a series of “Aha” moments led him to closer and closer to a relationship with God.

So why would a lawyer who spends much of his time on the politics of the day take the time needed to write a book like this? I have to believe that he senses these are greater issues at stake and that he felt compelled to point to these issues that often avoid our attention:

If you are looking for reasons not to believe, I suppose you will find them. And if you are close-minded toward the supernatural or toward a Christian worldview, I concede that you will continue to resist these ideas. But if you approach the evidence with an open mind and open heart, I think you might be surprised how God will begin to convince you that He is Who He has revealed Himself to be—in creation, in nature, in His incarnation, and in His Bible.

The two central questions of the book are simple, “Who is Jesus? Why does it matter?” If this man really lived in Israel 2,000 years ago and made the audacious claims that the New Testament says he did, each of us need to consider whether or not he is right. If we decide Jesus was just a moral teacher or a prophet, we face a serious dilemma: Jesus makes it clear that He is neither. He claims to be the Christ, that He is God in the flesh, and that He came back to life after being killed. These are not claims made by a moderate, moral man. These are the claims of someone who is either completely wrong or someone who really is who he says he is.

If You Have Recently Read The Case for Christ

There seems no way to talk about Limbaugh’s book without mentioning the similarities to Lee Strobel’s well-known personal apologetic The Case for Christ. The comparison is difficult to avoid simply because both of these books are worth reading several times. Limbaugh’s book (and Strobel’s) is personal, intellectually diligent, and persuasive. Similar to two separate witnesses to an event, both of these men give a personal testimony of the transformational power of God. Christ’s fingerprint is on both of their stories.

Thank you to the people at Regnery Publishing for a copy of this book for review.

This entry was posted in Book Reviews, Faith/ Apologetics and tagged apologetics, David Limbaugh, Jesus on trial. Bookmark the permalink.

1 Response to Review of “Jesus on Trial: A Lawyer Affirms the Truth of the Gospel”