Review of “The Road to Freedom: How to win the fight for free enterprise”

On the Shoulders of Giants 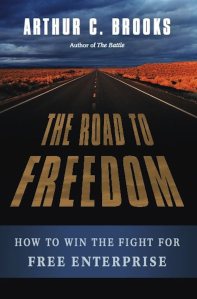 In “The Road to Freedom: How to win the fight for free enterprise”, Arthur Brook makes the moral case for capitalism. Written in 2012, the book focuses on the turbulent political situation in the United States. Since the trend of big government continues unabated in the United States, the federal government is becoming increasingly involved in a cycle of increased taxation, more borrowing, and redistributive policies. The United States risks a more comprehensive transition toward statism unless a conscious decision is made to defend economic freedom.

Brooks argues that many advocates for free markets have made accurate and astute cases based on policy, causal relationships regarding the effects of entitlements, and the ability of capitalism to raise millions out of poverty. These same people have the statistical and empirical evidence they need to in order to prove their points; yet, a compelling…

This entry was posted in Uncategorized. Bookmark the permalink.